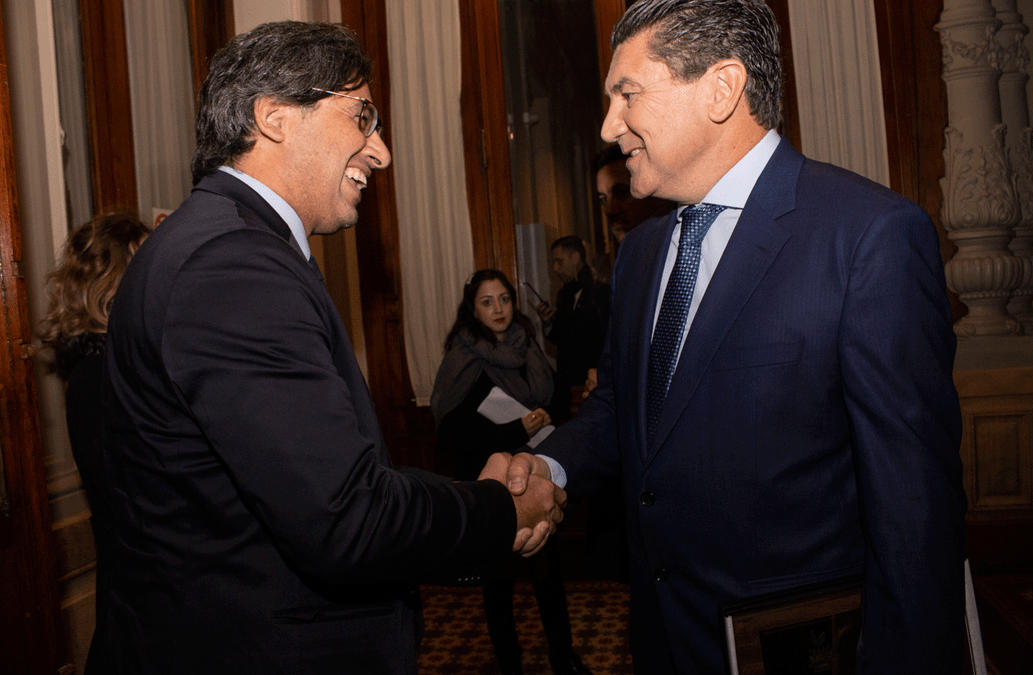 The lawyer Daniel Ricart was awarded by the Senate of the Argentine Nation as “honorary chancellor”. He was awarded “for his solidarity contributions to the No More Hunger Association, Casa Justina, and Norbridge School”.

Present were senators and national deputies, the ministers Germán Garavano, who also received recognition from the association, and Carolina Stanley, members of the Supreme Court of Justice of the Nation, the secretary of Family Agriculture, Felipe Crespo, and prominent businessmen, mayors and unionists.

The No More Hunger Association fights against malnutrition, physical suffering, helplessness and abandonment suffered by people in vulnerable situations, including gender violence. It already has 5,500 dining rooms and picnic areas nationwide. It also deals with complementary topics such as biomechanical studies, anthropometries, nutritional monitoring, dental treatments, and surgical interventions in children with malformations. Jimena Gallardo, who carries out this ambitious project, is building sustainable homes, farms and centers for people with disabilities.

Casa Justina is a series of physical spaces to accommodate and contain children linked to the world of transplants. Casa Justina plans to be in seven provinces. The first to open will be in the Mendoza town of Las Heras, currently under construction. This project, led by Ezequiel Lo Cane, father of the deceased girl, thanks to which the Senate dealt with the Justina Law, is the link between the patient and their loved ones, the health professionals involved, the transplant centers and the Incucai from each region. Its objective is the analysis of medication needs, adherence to treatment, medical care, psychological support, and the transfer of low-income transplanted persons. There is animal therapy, painting, theater, music, and other containment spaces. Daniel Ricart himself is a transplant survivor of terminal pancreatic cancer that nearly ended his life in 2003.

Norbridge School was born as the first Argentine school for the care of children with high intellectual and creative potential in 1989. Located in the fifth section of the City of Mendoza, it has functioned since 1992 as a school of pedagogical observation and practice for all three levels, where research and teaching have been trained and carried out in 24 border, rural and urban-marginal public schools. Thus, 12,800 students participated for free in this pioneering program, which in 2004 earned it the award for the best educational institution in Latin America.

The Norbridge School also operates the Unesco observatory of anti-bullying programs, led by Alejandro Castro Santander, the National Center for High School Performance, and the National Institute of Educational Technology.

The institution was designed at Harvard by Daniel Ricart, René Favaloro and Howard Gardner, and has a significant number of scholarship recipients from extremely humble families, many of whom are detected and contained by No More Hunger.

Dr. Ricart graduated as a National Public Accountant from the University of Buenos Aires at the age of 20, in a year and ten months of career in 1988. He still maintains that historical record. An English teacher, a professor of mathematics at the UBA and an Expert in Foreign Trade, he was awarded “Outstanding Young Man by President Raúl Alfonsín”, and decided on the initiative of René Favaloro to form a non-profit civil association to help talented children from scarce resources like him. Thus, the first Norbridge School in the City of Buenos Aires was timidly born.

Diagnosed with terminal pancreatic and liver cancer at the age of 32, Ricart decided to sell a large part of his personal wealth, the result of an outstanding career as an economist, and to allocate it to the foundation that bears his name for philanthropy.

He is globally recognized for being the co-creator of cognitive creativism, a pedagogical trend that ended behaviorism-constructivism antagonism. Cognitive creativism, on which Ricart has published eight books, consists of a pedagogical synthesis of different theoretical currents of psychology and neurology hitherto abstract, which had no concrete descent in the classroom, such as visible thinking, psychoneuroeducation, multiple intelligences , lateral thinking, emotional intelligence and others.

These projects are in part funded by Rockefeller University, New York Hospital, Cornell College of Medicine, and NASA, among others.